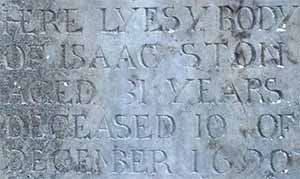 The Old Burying Ground is Lexington's oldest cemetery; the earliest graves date from 1690.

The entrance of the Old Burying Ground is on the corner of Harrington Road and Massachusetts Avenue, just across the street from the Battle Green. A house shares the driveway, which is marked with a small sign and the large stone shown below.

The cemetery contains the graves of many prominent early Lexington settlers, as well as soldiers from the Revolutionary War and the Civil War - even a British soldier who was injured in the fighting on the Battle Green and died a few days later in Buckman Tavern.

Captain John Parker was suffering from tuberculosis when he led the Minutemen on April 19, 1775, and he died on September 17, 1775. Many believe he is buried in the Old Burying Ground, but no gravestone has been found for him. There are, however, two memorials to him in the graveyard.

One of the oldest graves in the cemetery is that of Isaac Ston, pictured above. The grave reads "Here Lyes Ye Body of Isaac Ston Aged 31 Years Deceased 10 of December 1690".

Information about the Old Burying Ground 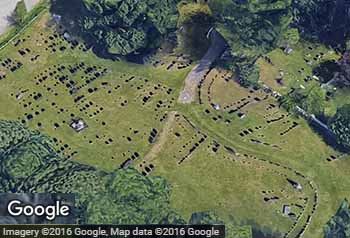 View the Old Burying Ground on the Google satellite map.