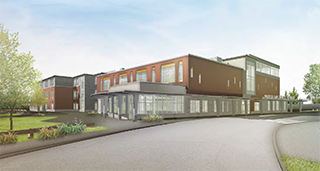 The Hastings Elementary School was originally built in 1955. It is a 2-story building consisting of 62,000 SF. Since this time modulars have been added to meet the increase of enrollment and educational program demand.

In January of 2016, the Town of Lexington was notified that the Massachusetts School Building Authority (the "MSBA") Board of Directors had recently voted to invite the Statement of Interest for the Maria Hastings Elementary School into the MSBA's Eligibility Period. The Eligibility Period formalizes and streamlines the beginning of the MSBA's grant approval process and provides a definitive schedule for these preliminary requirements and identifying the planning and scheduling needs.

On February 22, 2016, an affirmative vote of Special Town Meeting appropriated $1,500,000 to compete the MSBA Feasibility Study, the next phase of the MSBA process. Additional eligibility requirements that were completed included Certification of Design Enrollment as 645 students and the appointment of a School Building Committee for this MSBA project, with members from Lexington's Permanent Building Committee, School Committee appointees, and staff.

On May 25, 2016 the MSBA Board of Directors invited the Town of Lexington to partner with MSBA in conducting a Feasibility Study for the Maria Hastings Elementary School. Lexington and MSBA has completed the first two steps of the Feasibility Process, contracting Dore and Whittier Management Partners, as the Owner's Project Manager (OPM) and DiNisco Design, as the project Designer. The Feasibility Process is expected to continue through August of 2017.