The Hosmer House was relocated off site on November 13.

See a live feed of the Police Station Project from a mounted camera.

Election results have 56.6% voting 'Yes' to the ballot question.

See the certified results of the Special Town Election of June 6, 2022.

Town Manager Jim Malloy, Police Chief Michael McLean, and Public Facilities Director Michael Cronin were available at two public info session to present the need for the Police Station project and the financial impact to the community. Following the presentation, they took taking questions from the public. The video from one of the sessions is available below:

View the video recording of the info session

The Town is seeking to replace the current Police Station with a building that meets the community's current-day public safety needs. The current building was designed to support a community that was about 70% of the size of the current population, and generated half as many calls in a year as it does now.

The current Police Station has been renovated several times over the past 50 years to squeeze more useful space out of the existing plan. About 400 square feet of additional space was added in the form of two shipping containers for storage use.

History of the Police Station Project

The Town Manager reported to the Select Board that the Police Station debt is estimated to cost the average single-family taxpayer $258 the first year of the debt down to $149 in the 20th year of the debt repayment (average of $204 per year). This works out to approximately a 1.6% increase over current taxes for the first (highest) year.

Use our calculator to see what it will cost you the first year.

The Town is working to mitigate the financial impact of major capital projects, such as the Police Station, on taxpayers through a capital stabilization framework (CSF). View the Town Manager's memo to the Select Board outlining the CSF (PDF).

View the Town Manager's memo to the Select Board (PDF) regarding the total amount of excluded debt, and the impact to single-family tax bills.

Frequently asked questions about the project.

For questions or additional information, please contact the Town Manager's Office via email, or by phone at 781-698-4540. 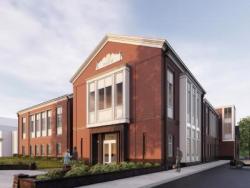