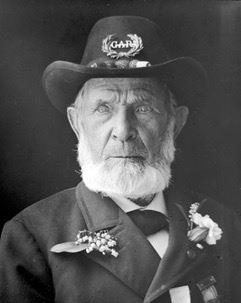 The photo of Thomas Cosgrove that appears on this page is courtesy of The Edwin B. Worthen Collection, Cary Memorial Library.

Thomas Cosgrove, a vegetable farmer in Lexington, was 40 years old when he enlisted in Company F, 40th Massachusetts Infantry to fight in the Civil War. When 26-year-old Thomas left Ireland to make his fortune in America, no one could have imagined that their friend, standing 5 feet, three inches tall and weighing 130 pounds, would one day become a war hero. But his feistiness and courage earned him the Congressional Medal of Honor.

2021 year marks the 160th anniversary of the start of the Civil War. To honor this occasion, the Town Celebrations Committee's virtual Memorial Day program will focus on Lexington's Civil War veterans and their stories. This is the story of Thomas Cosgrove, but others will be shared in a video to be aired on Memorial Day, May 31.

Thomas Cosgrove lived to the ripe old age of 92. On Memorial Day in 1904 and again in 1910, when Cosgrove was in his eighties, the Boston Globe ran feature articles about his war exploits and post-war life, based on personal interviews. These articles give us precious detail of the encounter with the Confederate soldiers that earned him a Congressional Medal of Honor, as well as a portrait of this colorful man.

The President of the United States of America, in the name of Congress, takes pleasure in presenting the Medal of Honor to Private Thomas Cosgrove, United States Army, for extraordinary heroism on 15 May 1864, while serving with Company F, 40th Massachusetts Infantry, in action at Drewry's Bluff, Virginia. Private Cosgrove individually demanded and received the surrender of seven armed Confederates concealed in a cellar, disarming and marching them in as prisoners of war. In later life, Cosgrove was a farmer on Maple Street and much-loved by his fellow Lexingtonians and [Grand Army of the Republic] GAR comrades who erected this stone.

The two Boston Globe articles offer a more colorful version. On the foggy morning of May 16, as the Confederates prepared to charge across an open field:

Cosgrove in scouting came upon what appeared to be an old-time cellar…Lying snug and lowest in the deepest part of the depression were seven of the enemy… Covering them with his seven-shooter rifle, the first repeating arm used in that war, private Cosgrove shouted: "Now, me bully rebs, out with your guns, One at a time, mind you, and the first man that tries any monkeyshines will join the great majority." While talking he kept his old Spencer seven-shot on the move, and not one of the seven could take oath that he was not the soldier aimed at. Then the guns began to come. In one, two, three order they were tossed outside and when the seven were beyond the reach of their owners, Cosgrove commanded the crestfallen lot to march along like good boys and make no attempt to escape.

Cosgrove unknowingly claimed another honor on April 3, 1865 when, on a scouting patrol watching the residents of Richmond evacuate the city ahead of the advancing Union troops, he became the first Union soldier to enter the city, retrieving a banner captured from the 39th New York at Fair Oaks.

After the war, he returned to Lexington and his farm. When the War with Spain began in 1898, he "announced his readiness to once more head to the front" and invited skeptics to meet him in a turkey shoot. He was an active and beloved member of the George G. Mead GAR post 119. Thomas Cosgrove died in 1912 and is buried in Munroe Cemetery. Each year on Memorial Day, the Lexington Minute Men conduct a flag wave-over ceremony at his grave.